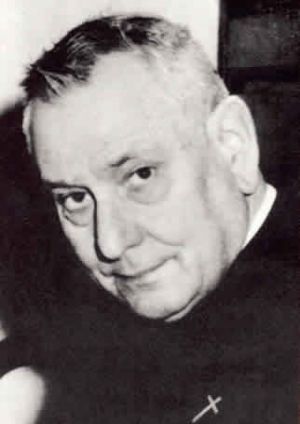 
1.- THE INTUITION OF FR. FRANÃOIS

The same circumstances of the principles of the Fraternity allow us to better understand what the intuition of Fr. FranÃ§ois has been:

- Forced to accumulate the functions of priest priest and chaplain of the hospital, Fr. FranÃ§ois makes a call to some sick or disabled young women to replace him in the task of visiting other patients in the parish. This initiative is very bright: it relies on lay people to associate them with its apostolate. In addition, these lay people are people with disabilities who, around them, go to other sick or disabled people.

- At the same time, Father FranÃ§ois discovers all the wealth of such an initiative:

â¢ The joy of sick and disabled people who, before they were not asked for anything, who were often left in great passivity in society and in the Church, and now they become active and responsible people of their brothers ... Their life has changed completely.

â¢ Friendship . Through established contacts, people know each other better, share their joys and hopes, help each other ... There they live a true friendship , something of the very love of God, which benefits everyone.

The bases have been launched ... The Fraternity was officially born on June 17, 1945, the day on which, in the framework of a retreat in BenoÃ®te-Vaux (France), under the gaze of Mary and with the impulse of the Holy Spirit , the patients make the decision to do in their cities what was done in Verdun and to do it in close union with the first team .... âWhen I realized this, says Father FranÃ§ois, I was glad ... "

In summary, it can be said that the intuition of Fr. FranÃ§ois has been to give birth, through the Fraternity, to an Evangelization Movement. Encouraged by sick and disabled people, they themselves - the Movement addresses all sick and disabled people - invite them, through a true friendship that finds its source and reason for being in God, to walk together towards a total openness in the world and in the Church.

The Fraternity of today needs to rediscover and deepen this first intuition. Because she is so original and rich, she is always new.

âYou are going to reflect on the evangelical mission of our Movement. What a capital issue! For the Fraternity it is a matter of life or death. If she does not evangelize, if she stays in purely human friendship encounters, even if she retains the name, it would cease to exist. What you live is an evangelical movement. I have expressed it with all my strength in the recent Document that I have prepared for the European Meeting in Lyon ... If so, I will be glad to leave this world with the certainty that a Fraternity, Evangelization Movement remains behind me â. (one)


3.- THE FRATER IS AN EVANGELIZATION MOVEMENT

a.- The foundation of FRATERNITY

In all this multitude of every race and every social condition there are people with physical illnesses and limitations. They too are called to evangelize and, of course, those who are in that same situation. This is the foundation of the Christian Fraternity of People with Disabilities. Christian people with disabilities establish bonds of fraternal love with those who are excluded and close to them. The Fraternity is not an Association of "affected" or self-help, but a MOVEMENT of dynamic people eager to increase the Kingdom of God in their brothers. (2)

b.- The originality of the FRATERNITY

Give his brother "love for life", say "Get up and go", that is the currency of the Fraternity. (two)

This is the ideal of the Fraternity: to make the sick a free man, standing up ... We want that liberation to be total and go to the knowledge and love of God.

The first thing is Love.

But experience proves that those fraternal ties are normally established. And God likes this friendship. I dare to say: she has a good taste of Gospel ...

The visited patient receives from his brother a love that is of evangelical quality. This brother is a member of the Church "sacrament of Christ" transmitting divine grace through all action animated by love. So he is moved by the divine life that gives love to God and neighbor. So the patient visited receives a friendship that is not banal but totally disinterested.

If he welcomes that friendship, if he feels happy about it, I affirm that there is evangelization and that it will increase with time ... (2)

Give reason for hope ...

The brother who lives intensely his faith certainly desires that his brother also live faith in God, and it often happens that his brother has faith but no life. Never pray, doubt the goodness of God. Delicately and in a timely manner, your friend will pass to the spoken testimony:

"Always be willing," says St. Peter, "to give reason for the hope that dwells in you." (2)

c.- The characteristics of the FRATERNITY

Pope John Paul II told the sick during his trip to Peru in February 1985:

âThe patient does not only need technical and health benefits. As a human being, he needs the affectionate presence of his friends. This presence is a spiritual medicine that returns the love for life and convinces you to fight for it with inner strength ... â

This text is excellent if you read in the spirit of the Fraternity, if these friends are sick like him. Thus, one can speak of spiritual medicine, love for life and inner strength to continue living. I cannot say it better than the Pope has said. (2)

... there is a contract to serve Christ, for an important work: the progress of the Kingdom of God and on it depends the salvation of men.

There was a time when simple people thought: "This task belongs to the priests, it is not ours." Father Cardjin has cornered that idea by founding the J.O.C. It was a true revolution within Christianity. Evangelization movements were born in all social environments. The popes encouraged this dynamism and the Second Vatican Council has confirmed this doctrine. (2)


4.- THE FRATER, EVANGELIZATION MOVEMENT WITH THE SAME WAY. TO MAKE CATHOLIC ACTION.

One day, I was told that the Fraternity must certainly evolve in the problems that arise. The society of 1985 is different from that of 1945. It is necessary to discover current problems. But change the spirit that encourages those responsible? Never! ... (3)

It is brotherly love that encourages you, but it is not about any kind of love. In Fraternity, we are on the supernatural level. All your gestures of love are enlightened by faith and animated by the Holy Spirit. (3)

Leave ... with this flame and communicate it to those who work with you. You will inflame others. (3)

It is convenient to contemplate these sick and generous Christians ... they find sick people who live their faith. United by fraternal ties, they "evangelize" each other and, with all certainty, they will understand better that it is necessary to radiate their own faith in the environment, walking towards what I call the mass of people with disabilities. (2)


5.- THE FRATER IS A CHURCH AND ECUMENIC MOVEMENT

If you think about the numerous contacts established throughout the Fraternity, it can be seen that people with disabilities are âliving beings and contribute to transmit - together with healthy people - the Good News to everyone. Thus, our society will become more fraternal and progress in Christ ...

Through the responsible sick, the sick will come out of the shadows and live in the light of God. (2)

You will spend a rest day in TaizÃ©, famous place for its ecumenism. I am happy with what is done ecumenically in Switzerland, Germany, and perhaps elsewhere. We share the same ideal with our Protestant brothers: May the Spirit of the Gospel, the Love of Christ reign in all the hearts of the sick and people with disabilities. (1)

First of all, that the fraternal ties and not just administrative relations be united with the Intercontinental Team. Write to each other with great sincerity. A great fraternity must reign between the head and the members. Surely there are important events in every nation. Say them, so that each Intercontinental circular - each three-month period - is fueled by experiences that will be useful to others and create fraternal ties. (1)

May each nation be well united at the head of the Fraternity! ...

May there be excellent fraternal contacts, for the best good of our dear Fraternity and its extension in the world!...