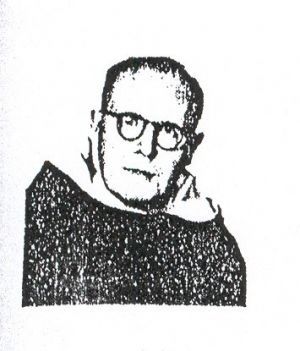 Paul Thierry d'Argenlieu was, in his principles, the theologian of the Fraternity of France. He also participated in the launch of the first international meetings.

"In 1948, at the same time as Fr. FranÃ§ois, he found Fr. d'Argenlieu, that very disabled Dominican, who will join his side, in the Fraternity, teaming up with Fr. FranÃ§ois, completing him marvelously.

The one said: Go ... go further and further, towards the others ... His fundamental intuition: the fraternal spirit lived by the mass of the sick.

And the other: Go deeper into what you live ... Specify this prophetic intuition ... Be responsible ...
Thus, little by little, the Movement defined itself, it started. He was recognized by the Church of France in 1957. "

This testimony of Germaine Renault underlines how important it is, in effect, not to forget the one whose role was "to think deeply about the doctrine of the Movement", in perfect collaboration with Fr. FranÃ§ois.

At his death, in 1969, the French National Bulletin devoted a special number to Fr. Paul Thierry d'Argenlieu, theologian, national consiliate attached for twelve years and who published, in 1966, the 3rd edition of the book on Fraternity with this title, so evocative: "Et nous voilÃ  vivants!".

A. Loisel then said of him: "Fr. d'Argenlieu is for me as one who has helped the Fraternity avoid the risk of sinking into a kind of" sentimental family ", helping him to move into the style of" Movement " , flexible and organized at the same time, simple but with a very dense intellectual, spiritual and apostolic content at the same time ... ".

Father FranÃ§ois having once compared the Fraternity to "an anthill that the sick will have built themselves, where they will feel at home, where they will be happy to live as brothers ...", Father d'Argenlieu then specified :
"There is simplicity and simplicity ...!"

Even defending the evangelical simplicity of the Fraternity, it is necessary to recognize, at the same time, the need for it of an order and organization as adapted as possible for its development and to the needs of our sick brothers, if she wants to extend her network of Fraternal charity throughout the world. The essential thing is that everything must remain fraternal and deeply flexible, that is, adapted to the true needs of the sick.

It is necessary to add that to the simplicity of the ant who only have to be guided by their instincts, poor humans as we are, we must demonstrate ingenuity, initiative and foresight, because God made us in his image and because we are beings spiritual, endowed with reason and freedom, capable of reflection and forced to choose, themselves, the means that seem best to them, the most adapted to the purposes they pursue.

In the anthill there is also a hierarchy as in a bee hive: there are workers dedicated to very diverse jobs and queens that have a primary role. In the same way, in the Fraternity, if there are grassroots leaders, whose role is indispensable, there are places of leaders in increasingly higher steps that contribute, also, to the strength and life of the Movement.

We must recognize, at the same time, with all justice that those who are responsible for the whole of the Fraternity bear the hardest responsibility that demands in a higher degree the gifts of animation, impulse and direction, these gifts are not confused simply and purely with charity, however generous she may be, although that is always the first necessary thing.

Observe the idea that presides over these reflections ...: the fraternal spirit demands to extend in the mass of the sick a community dimension and a solid team organization at all levels of the Fraternity, to measure and to the measure of their development "( P. d'Argenlieu).